Cooperative test for in-vehicle equipment and smart phone by one robot manipulator
- The latest version of "Quality Commander 7", the embedded software test automation system, is being released 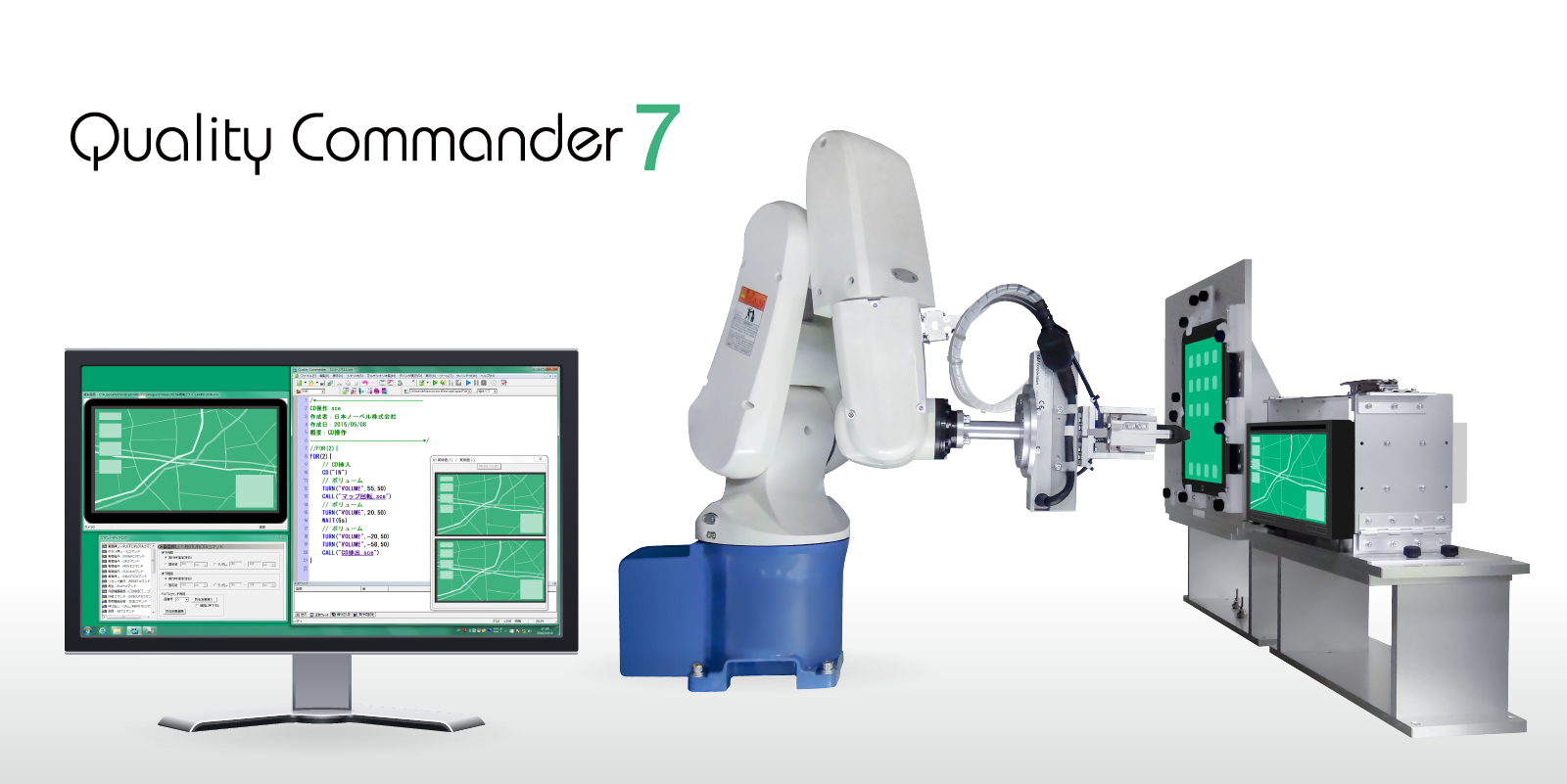 Automatic disk insertion and removal test is now added by detecting the residual state of disk in the CD slot with sensor.

3. Reviewed housing design to make easier to use

Workability at the time of test operation has been improved by changing the operation panel of the front robot housing to a touch panel and by improving the height of the working floor and structure of the door.

Quality Commander 7 - Characteristics of other lineups

1. Expansion of the scope of application of the touch panel equipment

The new robot which can perform the two-point pushing test is added to the lineup of orthogonal robot. The flagship model of touch panel testing system can correspond to the device size of 4 to 16 inches using orthogonal type robot with operation stroke of 400 × 400mm. In addition, we developed a new block-type adapter for orthogonal type robot system. It will adjust the difference in the thickness of the test target device by stacking the block and can accommodate from the thin devices such as tablet to a touch panel device with about 50mm thickness. An additional camera on the robot arm is also available for close-up photography which will improve the judgment accuracy for fine display.

The Android devices connected by USB can be automatically controlled without the robot.
As a new feature, the object access function has been added. Screen operation that does not depend on the coordinate value such as getting the value of the screen components directly or tapping operation by specifying the displayed string can be possible. In addition, adrExecute command which can invoke any of the adb command is added in the test scenario command. You can take advantage of using it in an application such as logging. Also, commands such as adrReboot which enables continued testing after restarting the terminal, adrDown/adrMove/adrUp which allow lock release of the target device or icon movement, adrPinch/adrRotate which can perform multi-touch operation are added.
Moreover, display at the time of creating test scenario is now smoother because display rate of pseudo screen is made faster than before.
Android 6.0 Marshmallow is now supported. We will continue to support new models in the future accordingly. Supported Android version on 2016 April is 2.3 to 6.0.

You can automatically operate a Windows PC connected by Ethernet. Windows XP, Windows 7 and Windows 10 are supported.
As a new feature, GETWO/GETWOR commands which are used to get the window information of the specified object are added.

1. Addition of a variation of the image judgment

The ability to capture any image at the time of execution of PIC command to get the still image is added. You can make the image judgment using the image captured by a non-standard configuration camera. Also LED judgment function by which the blinking rate of the LED is tested is added. The state outside the screen area such as power indicator can be automatically tested.

Setting work for the search command which is frequently used in the automatic judgment can now be done from the toolbar.

In addition to the reading of the CSV data while test scenario is executing, writing out of the CSV is also supported. It can be used as a test execution logging.

This product will be exhibited at 2016 Japan IT Week Spring 5th IoT/M2M exhibition which will be held at Tokyo Big Sight from May 11.

Inquiries regarding this press release


Related links are not implemented at this moment.

What is Quality Commander ?

Quality Commander is a system which automatically performs the operation of the equipment, the judgment of the execution result and store the result in a database. The fundamental features are such as the automation of the actual operation using a robot, screen capture using a camera which allows the test even in models that screen shot can not be taken and powerful image processing.

Quality Commander is widely introduced to the manufacturer such as consumer electronics and automotive equipment as automatic test systems and has been effective in improving the quality of software and efficiency in software testing. In addition, the usage of the system is expanding not only the automatic test by actual manipulation for embedded devices, but such as automatic test of the application software in the OS environment for Android/Windows/Linux/etc., fixed-point monitoring for services that continue to work 24 hours or product test utilizing automatic operation of simulator software. Japan Novel is committed to proceed the development of Quality Commander aiming to improve the test efficiency in more of the scene. 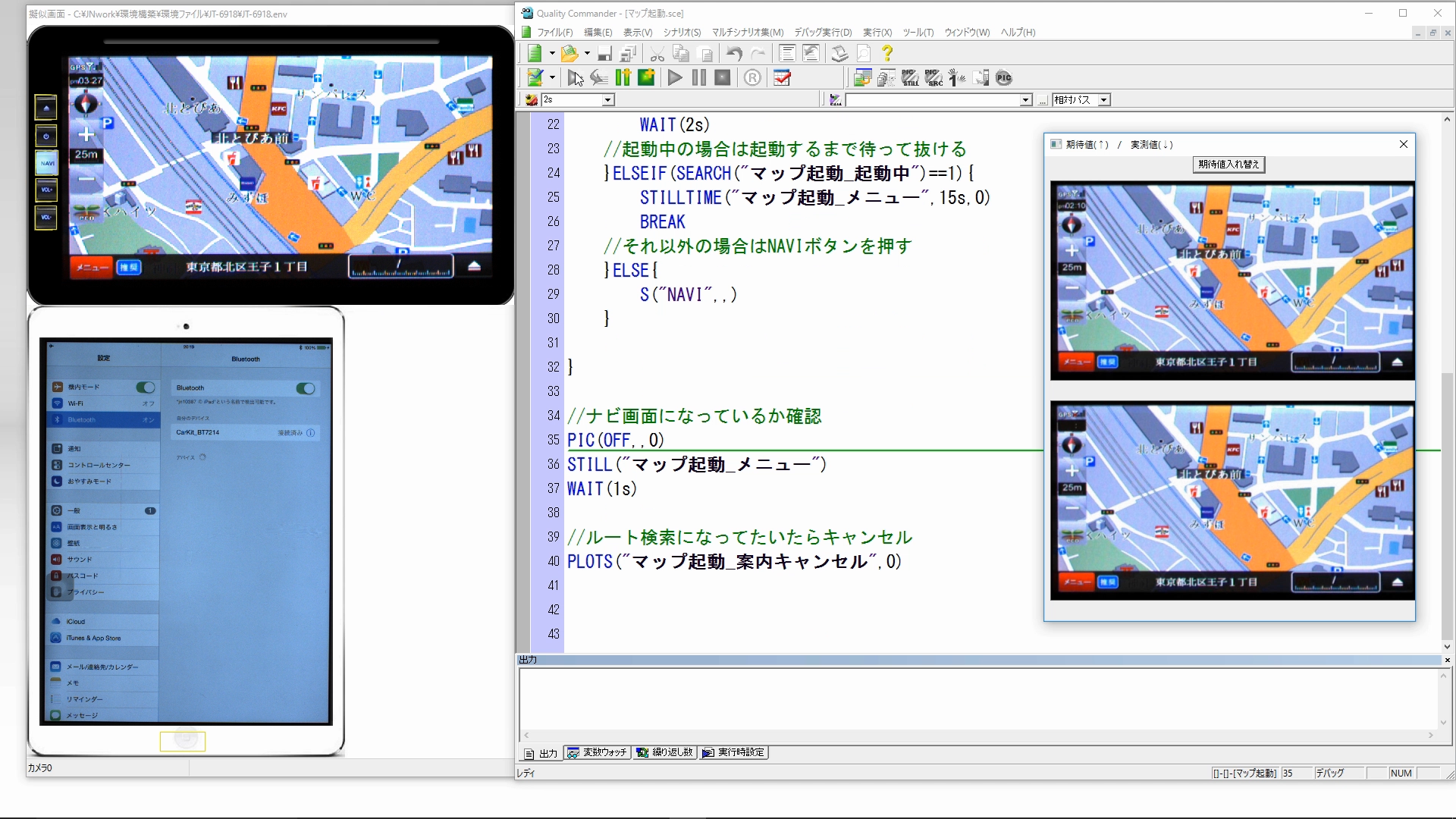 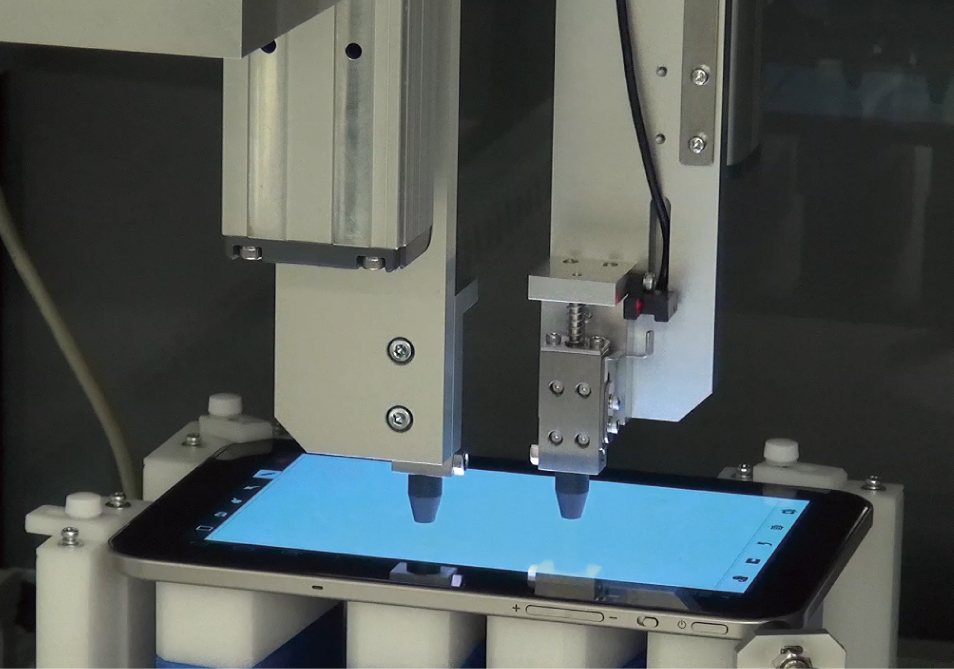 Japan Novel is an independent software company. It was founded in 1980 to become a force to support Japan's manufacturing with IT technology and since then has been providing total solutions in FA system and measurement control to meet the industry's needs for labor-saving and rationalization. In recent years, based on the technical capabilities that have been cultivated, Japan Novel developed the original products such as "Embedded software test automation system Quality Commander" for the quality improvement of software. Taking advantage of the characteristics of the software vendors that are not tied to hardware, Japan Novel offers a flexible solution in line with the actual situation in the field.

"Android" is a trademark of Google Inc.

Other company names, products and service names mentioned in this press release are generally registered trademarks or trademarks of their respective owners.